CT4N Charitable Trust (formerly Nottingham Community Transport) – a small charity based in Nottingham that provides a range of transport solutions to reduce social isolation and promote community cohesion across Nottingham and Nottinghamshire.  We’ve been providing services for over 40 years.  Our range of services include the operating the Easylink service on behalf of Nottingham City Council and also providing a Group Travel service for community and voluntary groups.

CT4N Ltd. is the trading company for CT4N Charitable Trust and supports the work of our charity.  We operate a range of contracted services for a number of clients including Nottingham City Council, Nottinghamshire County Council, Derbyshire County Council, Nottingham High School and SEGRO.  CT4N also operates a number of commercial services across Nottingham and Nottinghamshire.  All of our drivers undergo an enhanced DBS check, are provided with a smart company uniform and undertake regular training. We have various operating centres across Nottinghamshire including Sherwood, Queen’s Drive and Mansfield Woodhouse.  So, if your looking for a transport solution, then CT4N will have the answer. 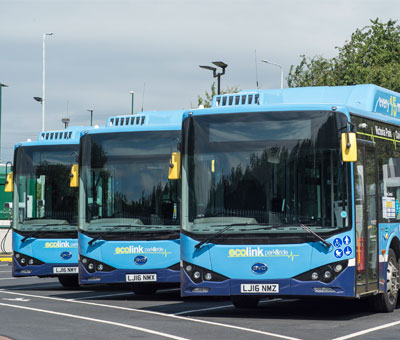 Formed as Nottingham Voluntary Transport with 2 wheelchair accessible and 2 standard minibuses. This was based in the car park of Sherwood Community Centre.

The concept of Dial A Ride was introduced with another 2 vehicles.

The company moved to the Trent depot at Manvers Street due to fuel thefts at the Sherwood Community Centre.

Fleet was increased and renewed. Funding was obtained from sources to replace the Dial A Ride Fleet.

The company then moved to Medway Street at Lenton where it shared the Social Services depot.

The company moved to a unit in Hooton Street.

The company moved to its present location at Sherwood Garage.

The company operated a full size Bova Futura coach for a year under the Handicruiser brand.

Introduction of the first Locallink service under the Mybus brand. Route 801 was Mapperley to Sherwood.

Up until the tram started in this year, the company operated a wheelchair accessible Park and Ride from the Forest Ground into the City Centre.

More Locallink services were introduced (L1, L2, L5 and L6) and the Mybus branding was dropped in favour of Locallink.

Route L7 was added to the Locallink network. Funding was granted from Age Concern to purchase a Group Hire vehicle.

Following the collapse of Premiere Travel service L64 was transferred to Nottingham Community Transport. L33 service was taken over from Nottingham City Transport. Queens Drive Compound was opened to accommodate the growing fleet of electric buses. Electric Optare Solo buses were added to the fleet and were introduced on to a number of routes.

Group Travel vehicles were upgraded, Medilink services were transferred to Nottingham Community Transport from NHS Trust and electric Optare Versa buses were introduced. Services L73/4/5 were introduced in Netherfield/Burton Joyce- our first contract for Nottinghamshire County Council. Clifton Shuttle, introduced for the Tramworks in Clifton (service was due to last only 3 months but continued for 18 months). Eventlink introduced on behalf of NET, transferring customers from Tram stop in City to Victoria Embankment. Further electric buses added to fleet to become Europe’s largest operator of electric buses.

Further improvements to Medilink service, with more buses early morning and evening. UK Bus awards- Finalists in the category ‘Putting Passengers First’ for Easylink service. As part of the partnership between Nottingham Community Transport, Nottingham City Council and University of Nottingham service L12 becomes free for all students. MP Lilian Greenwood visited Sherwood Depot to have a look at the Easylink Service Improvements to L1 Service for local schools and residents of Wilford and Silverdale. 13 New BYD Buses delivered as part of the contract for operating Centrelink and Ecolink. Easylink shortlisted at the UK Bus Awards under the 'Putting Passengers First' category. CT4N registered as a new business which would be the trading arm of Nottingham Community Transport.

Centrelink and Ecolink services start operating which are the first electric Park and Ride services in the UK. New partnership launched with Space Inclusive to prove transport for clients with learning disabilities.

New streamlined management structure implemented to bring both CT4N and Nottingham Community under one leadership team. New operating centres for CT4N registered at East Midlands Gateway and Mansfield Woodhouse. New commercial service S16 launched in Long Eaton. CT4N’s very first double decker introduced for school service in Mansfield. During the Covid Pandemic, services provided by the Charity are changed to provide essential services for people having to self-isolate. This includes carrying out shopping, collection of prescriptions and delivery of meals. The operating area for Nottingham Community Transport is amended to cover Nottingham and Nottinghamshire. CT4N Travel launched to provide a wide range of trips, holidays and excursions.